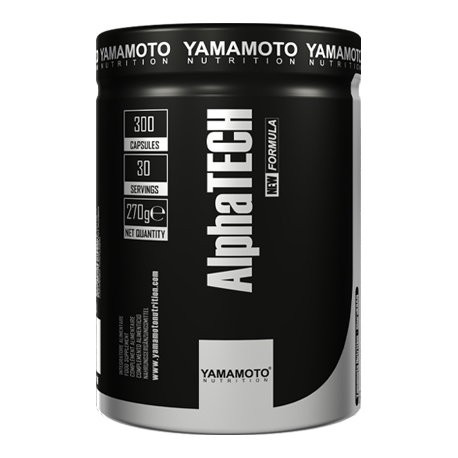 Yamamoto® AlphaTECH® proteins are produced and assembled in Italy in the best factories that can guarantee compliance, safety according to the highest quality standards.
The development of AlphaTECH® is the result of the close collaboration between the Italian company Yamamoto® and the Norwegian company Hofseth BioCare®. ProGo® (hydrolyzed salmon protein) exclusively for Yamamoto® has allowed us to create a product with unique and unrepeatable characteristics IN ITALY IN THE BEST PHARMACEUTICAL FACILITIES.

What is the difference between AlphaTECH® and all other proteins on the market?

2 - Greater digestibility and absorption. AlphaTECH® is a protein hydrolyzate consisting of free form oligopeptides and amino acids, with a balanced amino acid composition and particularly similar to human tissues. In particular it contains about 627 peptides (MALDI-TOF analysis) which are made up of various classes of small oligopeptides and amino acids in free form. The hydrolyzed mixture of ALPHATECH® thus results in a "predigested" form, and is divided into 5 fractions of classes of peptides based on their weight and molecular size and high bioactive power with extraordinary biological properties: 110-1000 Dalton, 1000- 1500 Dalton, 1500-2000 Dalton, 2000-2500 Dalton and> 2500 Dalton. Therefore 100% of all hydrolyzate is of a molecular weight lower than 3000 Daltons with + 50% which are characterized by oligopeptides.
Keep in mind that whey proteins generally present 70% or more of proteins with a molecular weight of over 10,000 Daltons. This will particularly affect in terms of rapid digestibility and absorption. In fact, the di and tripeptides cross the apical membrane by means of the pepT1 transporter, H + dependent (cotransport) making themselves even faster thanks to this "preferential" lane.

From the continuous analysis and research of raw materials confirmed by its true scientific value, the salmon protein hydrolysate is currently the most interesting and innovative choice to propose to a continuously evolving, widespread market. The word "innovative" is linked to the fact that we would be "innovators" in re-launching food supplements of this special raw material, previously relegated to the world of research in the field of nutraceuticals on astronauts, onto the market. The protein hydrolysate came to the fore as a "super food" for Soviet cosmonauts to support their specific needs, due to the rapid catabolic protein decay that occurs in the absence of gravity and the rapidity of gastrointestinal passage, for which a nutritional element with high biological value was required and one which was exceptionally quick to digest and absorb into the systems of those who find themselves in such extreme conditions. Left aside in favour of more well-known and noble raw materials with a more common use, conception and means of extraction, the decision was taken to re-propose the salmon hydrolysate ALPHATECH®, obtained from the natural hydrolysis of salmon meat itself and then processed and isolated by the Norwegian bio-marine company Hofseth Biocare, to the nutraceutical and sports market.

We should bear in mind that whey proteins, in principle, have 70% or more proteins with a molecular weight of over 10,000 Daltons. This will particularly affect the speed of digestibility and absorption.

ALPHATECH®'s hydrolysed mixture is, therefore, in "pre-digested" form, and is subdivided into 5 fractions of classes of peptides based on their weight and molecular size and high bioactive power with extraordinary biological properties: 110-1000 Dalton, 1000- 1500 Daltons, 1500-2000 Daltons, 2000-2500 Daltons and > 2500 Daltons. So, 100% of all the hydrolysate turns out to be of a molecular weight lower than 3000 Daltons with +50% that are characterised by oligopeptides with a molecular weight.

These figures are extremely interesting values for the athlete who carried out an intense sporting activity because it bypasses the digestive problem of having to subtract energy and blood from muscular work during rather than after performance, in which the digestive process is compromised by particular "emergency" biochemical situations caused by acute stress and none of the amino acids are absorbed at all. So, these free peptides and essential amino acids with very high bio-availability can be quickly found in the circulatory stream like ready-made bricks for the protection and reconstruction of damaged muscles thanks to its being already "pre-digested" and to exploit "alternative" absorption access carriers ( the already extremely rapid absorption of amino acids occurs through the apical membrane of the cells of the intestinal epithelium mainly through carriers that transport it together with Na+ (secondary active transport), but the di and tripeptides cross the apical membrane by means of the pepT1 carrier, H+ dependent (co-transport) becoming even faster thanks to this "preferential" lane that is not susceptible to competitiveness).

But the most significant feature that makes this hydrolysate so extraordinary by far is, as has been proven, how it has managed so exceptionally to exceed the isolated milk proteins by 79% and even hydrolysates of whey by 20%, in terms of nitrogen retention. Results that show a unique bio-availability capacity demonstrated in healthy human adults*. The better the quality of the biological value and nitrogen retention of a protein source, the greater the response in terms of protein synthesis, and the extraordinary sensation is that anyone who target uses this type of hydrolysate "feels it" on themselves within minutes as well as obviously in terms of maximising muscle recovery.

This is ALPHATECH®'s revolution in the world of protein supplements. Designed as a "super food" for use by the Soviet cosmonauts with extraordinary absorption and bioactive characteristics (also representing a huge potential in the medical world), nowadays, it is the only protein supplement of its kind for athletes, with extraordinary qualities in terms of rapid absorption; but even more than that, it presents itself as a mixture of peptides and amino acids in complete bio-available free form with maximum nitrogen retention capacity, offering concrete and complete support to prevent and combat muscle catabolism before, during as well as after training or performance. These are "critical" moments not only from a performance point of view but also at digestive level where, in this case, the highest concentration of amino acid substrates for lean mass accumulation and repair of muscle damage caused by training, is guaranteed.

*ProGo™, that received the Ingredient of the Year for Weight Management NutraIngredents Award at Vitafoods 2016.

5.Efficacy of a Fish Protein Hydrolysate in Malnourished Children

Take 10 capsules a day, in 2-3 separate intakes, with plenty of water.

Do not exceed the recommended daily dose. Food supplements should not be used as a substitute of a varied diet. A varied and balanced diet and a healthy lifestyle are important. Keep out of reach of young children. Do not use if pregnant, in children or for prolonged time without consulting a doctor. Keep in a cool, dry place. Avoid exposure to heat sources and sunlight.